Adisadel College is an Anglican school for boys in Cape Coast, Ghana, modelled on the English public school. 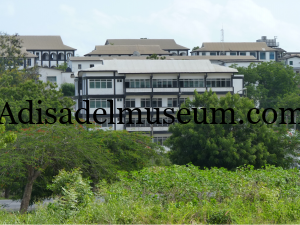 Adisadel College, situated on a hill a few miles north of Cape Coast, Ghana, with breathtaking views of the Atlantic Ocean, was founded in 1910, under the auspices of the Society for the Propagation of the Gospel (SPG), an English missionary body tracing its origins to 1701. First called SPG Grammar School by the founders led by Nathaniel Temple Hamlyn, then Anglican Bishop of Accra, it had lost its missionary bindings by the late 1920s when it was renamed St. Nicholas Grammar school, adopting the friendly prelate from Myra, Turkey, as its patron saint.

The School moved from Topp Yard in Cape Coast, to its present site on a commanding hill near Adisadel Village in the 1930s. Tradition has it that the schoolboys, hearing of the monks of Buckfast Abbey, Devon, England, who had built their monastery with their own hands, determined to do the same, inspired by their Headmaster Alan John Knight, in an “epic in concrete”, they proceeded to build on the hill what is now a boarding school with a population close to 2000, distributed into ten Houses

A 3-year boarding secondary school for boys (14-18years), Adisadel was founded on January 4th, 1910 by the Society for the Propagation of the Gospel (S.P.G.). The school was then named SPG Grammar School. In 1924 the name was changed to St Nicholas Grammar School. When the school was relocated to its present location in early 1936 from downtown Cape Coast, it assumed its current name-Adisadel College.

Adisadel College campus sprawls over an area of approximately 1.5 square kilometres over hills and valleys in a suburb of Cape Coast known as Adisadel. Located in the historic city of Cape Coast on the beautiful central coast of Ghana. Adisadel is among the many fine educational institutions that have rendered the central coast as the cradle of premium education in Ghana.

The school campus spreads above and below a hill that is rich with tropical ecological preserves. The lower campus, known as Katanga, is joined to the upper campus by a stairway of 83 steps that rises over 150 ft. The upper school known as Leopoldville is where the academic and administrative facilities are located. With the current student population of 2000, the school has grown and evolved from an institution that started as training boys for the Anglican priesthood.

The vision of its founder, Rev Nathaniel Temple Hamlyn has yielded great success when one surveys the alumni of this school who have achieved greatness for their country and excelled in various endeavours. The beautiful campus of Adisadel College has facilities that are unique among secondary schools in Ghana. Among some of its facilities are a language laboratory (at one time used by the University of Cape Coast), a gymnasium, lecture theatre, computer laboratory, Library, sports stadium, an Infirmary, and a chapel.

There are ten dormitories that serve as student housing. Most of the student housing have housed family generations that passed through Adisadel, thus generating a loyalty unmatched on any Ghanaian secondary school.

Adisadel offers a rigorous academic training that prepares its student for university entry. However, students are encouraged to actively participate in extracurricular activities. There are also many student clubs and organizations that caters to various social and political interests. There are various musical groups that comprise of the Adisadel Jazz Band.

The school offers students a chance to grow spiritually. There are various religious organizations on campus that caters to the spiritual needs of students. Adisadel has always fostered the spirit of self-dependence. Students are trained to be disciplined and follow the school rules, the first of which reads “A breach of common sense, is a breach of college rule”.

Most of the facilities on the campus were built by the pioneering students. Such self-reliant deeds have positively influenced the generation of students who pass through the school to amply give back to the alma mater. Thus, Adisadel still enjoys the benevolence of its alumni who continue to honour the school through various gifts. Today there are Adisadel alumni associations all over the world. Most have achieved remarkable success and set enviable record. The competitive nature of Adisadel students can be found in the school motto “Vel Primus, Vel Cum Primis”, a Latin phrase which translates “Either the first or with the first.

Of all the many subdivisions of the city of Cape Coast (Kotokuraba, Kawanupado, Antem, Siwudu, Bakaano etc), the subdivision of Adisadel has emerged as the most progressive and evolved into a township. Located next to the subdivision of Antem at the southwestern part of Cape Coast and at the intersection of two major roads (Cape Coast – Abura road and Accra – Cape Coast by-pass), it has grown from a small village to a township with sprawling housing estates and a post office. Located at the highest elevation in the village, Adisadel College campus casts a shadow over the village. The college has economically benefited this community of approximately 5,000 by providing employment for some of its residents and serving as a marketing source for the diverse stores at the village. Though the original inhabitants of the village were mostly subsistence farmers, today most of the residents are involved in all kinds of vocations in the greater Cape Coast area. From the upper campus is a panoramic view of this village of four-square miles, nestled among coconut and palm trees. Though the village is quiet at night, the sound of the locals drumming and dancing till the wee hours of the morning can be heard from the campus. The village, which has had a long complimentary relationship with the students of Adisadel is well noted for its “chop bars” – which are open-air food booths. Students visit these chop bars for a hearty meal to supplement the campus food. Popular among such chop bars are Daavi, where one can relish in local delicacies like “Yorkor Gari” (Beans and Cassava grits) and “Emo Tuo” ( Rice balls and Soup). When visiting the historic city of Cape Coast, one must visit Adisadel College and the village for a thorough understanding of colonial Gold Coast and education in Ghana.

In an interview to the Santaclaus, Mr. R.T. Orleans-Pobee  gave the following descriptions to the school crest ;

Meaning of the symbols of the Adisadel Crest

The Three Crowns – The 3 colonies in Ghana when it was designed
1. The Gold Coast Colony (south)
2. Ashanti Territory
3. Northern Territory

Bishop’s Mystra – SPG’s Bishop’s Mystra in its affiliation with the Anglican Church; the School having been set up by the propagation of the Gospel (SPG).

The Three Balls of Gold – Represent the generosity of Nicholas our patron saint.